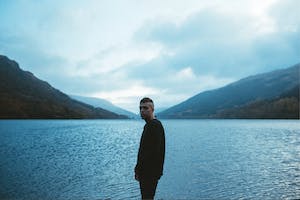 ‘Gratitude’ is an apt title for Benjamin Francis Leftwich’s third album. On the first (and title) track, the York-born, London-based singer sings of new beginnings and a sense of inner peace. “Finally can see it, I've landed on the ground / Look at all the peace I've found,” he reflects over fluttering synths. “If somebody had told me then what I know now I would not have listened, I wouldn't have known how / Would have burned down all the bridges, put up walls around everything I needed so nothing could be found.”

In the wake of the world tour for 2016’s ‘After The Rain’, with sessions already underway for what would become his third album and after a particularly heavy New Year’s Eve alone in his flat, the singer gave in, and checked himself into rehab. "My mind was so fried, broken, depressed, addicted and fucked," he reflects now, “and I’d had enough.” The title track of the new album plays out like some sort of Eureka moment. “'Gratitude' was written in the madness, but I was predicting where I was gonna get,” he says. “It says 'I'm free now, and I'm accepting what I am and what I need to surrender to in order to change.'"

‘Gratitude’ is an album predicting and then reflecting on huge personal change, and this upheaval seeps into every sinew of the record. Lyrically, it sings of redemption, guilt and regret, and it’s transmitted via music that bursts forwards like water breaking a dam, expanding the singer’s palate into widescreen, epic new territories.

Recorded between Sleeper Sounds and The Bridge in London with frequent collaborator Lazy H alongside Joe Rubel, Josh Grant and Beatriz Artola of Electric Lady studios, who’s previously worked with A$AP Rocky, Common and J. Cole, ‘Gratitude’ takes the hushed acoustic base of ‘After The Rain’ and the singer’s lauded 2011 debut album ‘Last Smoke Before The Snowstorm’ and fleshes it out to create a record unlimited in its ambition, and a portrait of a singer no longer limited, in life or in his art. "As writers, sometimes our currency is pain,” Ben says, “and it can be such a dangerous place to exist in. I was giving so much of myself to the music that I had nothing left for myself."

It was during breaks from touring 'After The Rain' in early 2016 that the bones of what would become 'Gratitude' started to be created, alongside work on 2018 EP 'I Am With You'. Songs were built up from voice memos mumbled into a phone into concrete ideas in the Dalston flat of Lazy H and a writing room in Brixton, a process that Ben says was "just getting it all out and writing really honestly. Lazy H was able to catch me in a really early place." The sessions helped capture a vulnerability and willingness to reform that seeps into the fabric of the album, which was then sculpted into its final form in a calmer headspace. The process was overseen by Beatriz, who mixed the record and moulded the ideas of the handful of producers into something flowing and coherent.

The album’s second song is 'Look Ma!', the first song Ben wrote after getting clean, and, he says, a reflection on how "just being clean doesn't mean that everything is blessed". "There's more to a storm,” he sings in the intro, before breaking through to a new place via thunderous synthetic drums and shimmering production. His voice also takes on a new, more forceful quality in the song, tearing apart his signature hushed tone for something grander and more confident. “I'm over the fake love making,” he sings. “Over pretending I know it all as I hit the floor."

Across the album, the singer stretches his capabilities and ambitions in every possible way; ‘Sometimes’ is an acoustic jam more closely aligned to his earlier work, but fleshed out by choral backing vocals and synths that surge forwards at the track’s most urgent moments, while ‘Tell Me You Started To Pray’ thuds along like a drive-time radio heart-wrencher. ‘Blue Dress’, meanwhile, bursts out of its comfort zone into a sky-reaching chorus that harnesses the anthemic qualities of Jack Antonoff’s Bleachers. It’s the sound of a singer-songwriter casting aside all genre boundaries and limitations and entering a glorious new era.

So closely tied to the struggle that informed the album, every note of ‘Gratitude’ carries an extra power. It’s a deeply necessary album that serves as the redemption of one man, but is transmitted in such an open, giving way that it can also be a guiding light for thousands of others.