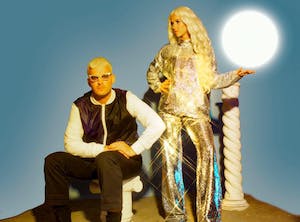 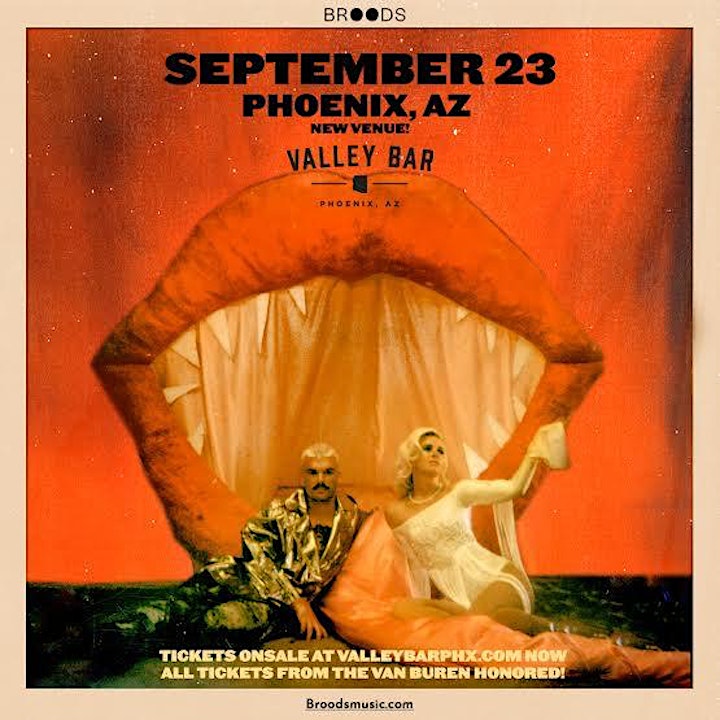 The title to BROODS’ new album may sound like a warning, but it’s really a self-reminder. After years of attempting to artfully navigate the pop landscape, the New Zealand-bred duo decided to drop all pretense and get back to embracing their purest and strangest instincts—a process that’s joyfully documented on Don’t Feed the Pop Monster.

“Our goal was to make songs that are true to us, without hiding behind any kind of façade,” says Georgia Nott, who co-founded BROODS with her brother Caleb in 2013. “Instead of overthinking everything like, Is that too weird? or Does this make enough sense?, we made a point of just completely trusting in ourselves and trusting in each other.”

The follow-up to their sophomore album Conscious—a 2016 release featuring collaborations with Lorde and Tove Lo—Don’t Feed the Pop Monster brings a new and more kinetic vitality to BROODS’ beautifully nuanced synth-pop. In creating the album, the L.A.-based duo reunited with their longtime producer Joel Little (best known for his work on Lorde’s Pure Heroine) and also enlisted producers like Tommy English (BØRNS, K.Flay, Andrew McMahon in the Wilderness). At turns ethereal and frantic, moody and euphoric, the result is an album that’s elegantly sculpted yet defies all pop convention.

With its looser energy and warmer textures, Don’t Feed the Pop Monster was also deeply informed by BROODS’ adopted hometown. Along with shaping the album’s groove-driven sound (an element Georgia describes as a byproduct of “living in this super-sunny, stoner-y city”), L.A. had a huge impact on the endlessly shifting tone of the songs. “It’s a love-hate relationship, where you can feel so loved one day and so lonely the next,” says Caleb. “The city kind of eats you alive,” Georgia adds, “but at the same time we’re all willingly walking into its mouth.”

That sense of volatility infuses songs like lead single “Peach,” a track whose kaleidoscopic sonic palette encompasses buzzing guitar tones and choir-like harmonies, woozy rhythms and intricate piano work. Written on a toy keyboard and recorded with English in Nashville, “Peach” brilliantly mimics the mercurial spirit of its lyrics. “As artists, you feel things at a much more extreme level than people who probably don’t spend most of their time inside their own heads,” says Georgia. “‘Peach’ is about feeling all over the place all the time, and then celebrating those moments when everything feels awesome.”

Throughout Don’t Feed the Pop Monster, BROODS instill their songwriting with an intense vulnerability and emotional specificity. On the delicately soulful “Too Proud”—the first-ever BROODS song to feature Caleb as the lead vocalist—the duo explores the shame of depression, gracefully turning the track into an unlikely anthem. “It’s about a really hard time I went through, where I didn’t realize how down I’d been until I came out of it,” says Caleb, who wrote “Too Proud” while BROODS were on a writing trip in the Nicaraguan jungle. (“I remember sitting behind him as he was recording the chorus, and being in tears but trying not to make any noise,” Georgia recalls.) Another moment of dreamy melancholy, “Every Time You Go I Cry” was penned at a time when Georgia’s husband was overseas for five months, the song’s fragile melody sweetly contrasting with its galloping beat and bouncy groove. And on “Hospitalized,” with its fantastically skittering vocal flow, BROODS deliver a bright and shimmering track about longing for a break from emotional accountability. “In Nicaragua, we were all talking about who had broken a bone, and I was saying how I’d never broken anything but kind of wanted to, just to see how it feels,” says Georgia. “That turned into this idea of wanting to get hurt so you can have something to blame your self-pity on. Like, ‘I’m sad—but I’ve got a reason, I promise!’”

Born into an exceptionally musical family, Georgia and Caleb had their breakthrough as BROODS with the 2014 single “Bridges.” That track appeared on their Little-produced full-length debut Evergreen, an album that debuted at #1 on the New Zealand Albums Chart and #5 on the Australian Albums Chart. With Evergreen winning four prizes at the 2015 Vodafone New Zealand Music Awards (including Album of the Year), BROODS released Conscious in June 2016 and soon saw lead single “Free” hit the top #10 on Spotify’s US Viral Chart. In addition to supporting Sam Smith on a sold-out US tour, BROODS have also played leading festivals like Coachella, Lollapalooza and Outside Lands and shared stages with artists like Ellie Goulding, Haim, and CHVRCHES over the past few years.

Despite all those achievements, BROODS feel that they’re “only now just getting started,” according to Caleb. Having recently endured some major label shake-ups, the duo brought Don’t Feed the Pop Monster to life with very limited resources but ultimately created their most fully realized album to date. “We worked really hard and went through a thousand different emotions,” says Georgia. “For a moment, we thought everything was falling apart, and maybe we’d have to move back home and never make music again, but somehow we just kept going. The fact that we can feel that way and still make something that’s so true to us—to me that’s the most important part of this whole experience.”