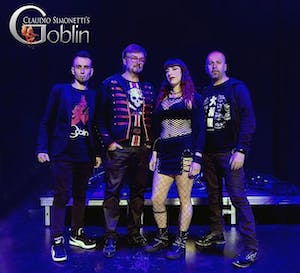 The son of composer and entertainer Enrico,[1] He was the keyboard player for the Italian progressive rock band Goblin, which initially formed under the name Cherry Five. He has been influenced by Keith Emerson, Brian Auger, Rick Wakeman and Tony Banks.[2]

Beginning in 1978, Simonetti founded a number of electronic disco projects. In 1979, with Giancarlo Meo, he formed perhaps his best-known project behind singer Vivien Vee (Viviana Andreattini), whose song "Give Me a Break" became a minor hit in the American dance charts. Later Vivien Vee tracks particularly "Blue Disease" from 1983, showcased some of the darker and edgier sounds familiar from the Goblin years. Another project he was involved was Easy Going, with "Baby I Love You" from 1978, and "Fear" from 1979.[3] In 1983, he was the central member of the Italo disco group Crazy Gang.

Soundtracks – A tribute to Pino Rucher. The Daemonia band are playing a composition from the film Phenomena.

In 1999, Simonetti formed the heavy metal band Daemonia, which has recorded updated versions of Goblin favorites in addition to original material. Daemonia has also contributed tracks to U.S. DVD releases of Italian horror movies. He composed the title track "Mater Lacrimarum" for The Mother of Tears soundtrack in 2007, which features background vocals by Dani Filth.[citation needed]

In 2009, Simonetti collaborated with the Los Angeles heavy metal band Rusty Eye. He played keyboard on "Mondo Cane" and "Wings of the Demon" from the album Possessor. On 16 October 2010, Simonetti with his group Daemonia took part in the event Soundtracks – A tribute to Pino Rucher. The event was sponsored by the Municipal Authorities of San Nicandro Garganico and Manfredonia.[4][5]

Also in 2010, Simonetti reunited with his former Goblin bandmates Massimo Moranti and Maurizio Guarani along with his group Daemonia's rhythm section to form New Goblin. They played several concerts around the world. This lasted until the fall of 2013 when he left New Goblin along with Daemonia's rhythm section to reform Daemonia under the new banner Simonetti's Goblin.

In 2013, he played keyboard on the "Aggregat 4" track from the Simulakrum Lab album, a vintage synthesizers music project created by Paolo Prevosto. 2015 released with the Murder Collections, new arranged version of his film themes, include Profondo Rosso, Suspiria, Tenebrae, and Dawn of the Dead.[6]