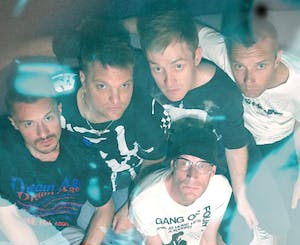 On their sixth album LA Divine, Cold War Kids pay tribute to Los Angeles and all its strange glory. The follow-up to 2014's Hold My Home -- featuring the gold-certified single "First" -- the band's latest is slightly tongue-in-cheek in its title. "In many ways LA is the least divine city, the most hedonistic and irreverent and disconnected from history," says Cold War Kids singer/guitarist/pianist Nathan Willett. Still, LA Divine embodies the Long Beach-bred band's endless fascination with their adopted hometown. "LA's so massive, I feel like I'm always finding something new in it," says bassist Matt Maust. "It's an incredibly weird place, and I'm happy to have made a record that totally honors that weirdness."

A feeling of infinite discovery instills much of LA Divine, the band's most expansive and ambitious effort so far. With Cold War Kids having recently marked the 10-year anniversary of their acclaimed debut Robbers & Cowards (a 2006 release that spawned their breakthrough single "Hang Me Up to Dry"), the album channels the kinetic energy of a newly revitalized band. "The excitement I have about this new album -- it feels so much like the way I felt back when our first record came out," notes Maust.

For Cold War Kids -- whose lineup also includes drummer Joe Plummer, multi-instrumentalist Matthew Schwartz, and guitarist David Quon -- that rejuvenation follows a creative rebirth of sorts. As Willett explains, the band took a more pop-informed and decidedly inventive approach to the making of LA Divine. "From the start of the band, our tastes have always been very backward-looking in terms of the tones and sounds and instrumentation we're working with," he says. "On this album we wanted to embrace something more modern, because in many ways the most creative sounds happening right now are coming from the world of pop and out of that influence we've ironically created what sounds like our most rock record yet "

With its sonic palette inspired by everything from Frank Ocean's Blonde to Florence & The Machine to Alabama Shakes, LA Divine merges that artful, hook-minded production with Cold War Kids' classic post-punk grit. And in his lyrics, Willett offers both raw vulnerability and layered complexity, bringing his heart-on-sleeve sensibilities to songs exploring long-lasting love. "So many songs are about new love or about breakups, but I wanted to go deeper than that for this record," he says. "We're older now and we have more life experience, and it felt right to have these songs about the beauty and the ugliness that comes with long-term relationships."

Produced by their repeat collaborator Lars Stalfors (Health, Local Natives), LA Divine opens with lead single "Love Is Mystical": a soulful, sweeping anthem about seeking transcendence and greater depth in love. "It's a very LA thing but also just a very American thing: we think attraction is all about the physical, and we don't think so much about the spiritual or mysterious element of it," says Willett. A more pensive meditation on enduring love, the slow-burning "Restless" brings sparse beats and ethereal textures to bracingly honest lyrics about "the kind of relationship where you're both always searching for something more," according to Willett. And on "So Tied Up," British singer/songwriter Bishop Briggs lends her formidable vocals to a stomping, gospel-infused number that shines a light on everyday struggle ("Love is a twisted game and no one ever wins") but undeniably burns with the promise of hope.

Befitting of an ode to Los Angeles, LA Divine also confronts the anxieties of aging and the toxic lure of reckless living. Urgent and unhinged, "Luck Down" gives a blunt but loving picture of self-destruction ("I won't lecture you on Lexapro...You'd rather medicate/With every pour"). But while "Can We Hang On?" admits that "we cannot stay forever young and out of our heads," the song's cascading guitar work and soaring harmonies make for subtly triumphant look at growing older and stumbling toward transformation.

Threaded throughout LA Divine are several brief interludes that uncover the better-hidden realities of life in Los Angeles. Hazy and distorted, "LA River" captures a dreamlike desperation. With its lo-fi beats and jagged poetry, "Wilshire Protest" contemplates LA's culture of isolation ("We are separated by/Steel and glass/In traffic trapped on the freeway/Everybody is a DJ"). And with the fleeting piano ballad "Cameras Always On," Cold War Kids deliver a powerfully tender portrait of heartache in just 36 seconds ("I wanna be famous in your eyes but the camera's always on").

Based in LA for more than a decade, Cold War Kids formed in 2004, soon after Willett and Maust met in college and bonded over their obsession with the Blur album 13. After making their way through their homegrown Southern California scene, the band released Robbers & Cowards to major critical praise and much adoration from the mid-2000s blogosphere. The notably darker Loyalty To Loyalty followed two years later, while 2011's Mine Is Yours introduced a more anthemic element to the Cold War Kids catalog. With 2013's Dear Miss Lonelyhearts, the band returned to their fierce live sound and offered up their hit single "Miracle Mile." In addition to yielding the smash hit "First" (a track that shot to No. 1 on Billboard's Alternative Songs chart, where it spent six weeks in the top spot), Hold My Home debuted at No. 8 on Billboard's Top Alternative Albums chart and reached the top 20 of the Top Rock Albums chart.

On the heels of Hold My Home, Cold War Kids felt emboldened to bring a more deliberate, purposeful spirit to their music than ever before. "With our last record doing so well, there was a feeling of wanting to challenge ourselves and create something culture-shaping and important -- not just for our fans, but for anyone who loves music," says Willett. "We wanted to open ourselves up and be real and vulnerable about who we are and what we want to say, and at the same time push for a certain greatness."

Along with elevating Cold War Kids' songwriting on LA Divine, that ever-renewing sense of purpose continues to breathe new life into the band. "I've seen a lot of bands get burnt out on their own songs after playing them for years, but for me that's not the case," says Maust. "I've been playing 'Hospital Beds' for 13 years, and it means something different to me now than it did when we first started. I don't know where that spark comes from, but I don't think I can stir it up on my own. You have to keep constantly showing up -- and remember that this thing you created is really special, and you've got to do whatever you can to keep it alive."

EVERY SONG FROM NEW YORK CITY’S SAMIA SHOWS A POET’S GIFT FOR CAPTURING THE MOST PRIVATE OF EXPERIENCES, A GRITTY SPECIFICITY THAT LEAVES HER LYRICS CARVED RIGHT ONTO YOUR HEART. HER BALLADS RECALL A LOW-LIT CHARM AND HER ROCK SONGS REV AND HOWL WITH INTENSITY. BUT WHETHER THE VOLUME IS UP OR DOWN, SAMIA DRAWS FROM THE SAME WELL OF SHARP-WITTED LYRICISM AS FOREBEARS OLD AND NEW — FROM PATTI SMITH TO LIZ PHAIR TO JOSH TILLMAN.

SINCE MAKING HER DEBUT WITH THE 2017 SINGLE “WELCOME TO EDEN,” THE 22-YEAR-OLD SINGER/SONGWRITER HAS DRAWN ACCLAIM FROM THE LIKES OF PITCHFORK, WHO PRAISED HER “SEARING ACCOUNTS OF FEMINIST FRUSTRATION AND DAILY ANXIETY” AND THE FADER, WHO HAILED HER “RAW, ELECTRIC ENERGY” AND “KNIFE-SHARP LYRICISM”. IN AN ESPECIALLY MEANINGFUL FEAT FOR SAMIA, FATHER JOHN MISTY STUMBLED UPON HER SINGLE “THE NIGHT JOSH TILLMAN LISTENED TO MY SONG,” AND PROMPTLY PROFESSED HIS LOVE FOR IT ONLINE.

OF COURSE, IT’S NO SURPRISE THAT HER HEROES ARE FALLING FOR HER. SAMIA IS ONLY 22, BUT HER SONGS AREN’T. THEY ARE THE SORT OF EMOTIONAL TANTRUMS AND LAST-CALL THESIS STATEMENTS THAT FEEL LIKE THEY’VE BEEN THERE FOREVER, JUST WAITING FOR SOMEONE TO COME AROUND AND SING THEM.

NOW WITH HER NEW DOUBLE A-SIDE SINGLE “LASTING FRIEND”/“PARIS,” SAMIA FURTHER PROVES HER PROFOUND SKILL AT TRANSFORMING PAINFUL OR UGLY OR ENTIRELY ORDINARY MOMENTS INTO SOMETHING TRANSCENDENT. THE GLORIOUSLY SCRAPPY YET STRANGELY TENDER “LASTING FRIEND” FINDS SAMIA BUILDING AN UNLIKELY ANTHEM OUT OF A COMPLICATED HIGH SCHOOL MEMORY. “I HAVE THIS PARTY ANECDOTE ABOUT HOW THE BOYS IN MIDDLE SCHOOL USED TO LINE UP IN THE GYM AND TOUCH MY BOOBS,” SHE RECALLS. “IT'S AS FUNNY AS IT IS DIFFICULT FOR ME TO GRAPPLE WITH, BECAUSE IT'S HOW I LEARNED TO MEASURE MY WORTH. I MADE A LOT OF FRIENDS THAT WAY AND IT'S HARD TO UNLEARN THAT ROUTINE; WE WERE ALL TRYING TO MAKE SENSE OF THE ROLES WE WERE ASSIGNED.” BACKED BY BROOKLYN BAND ACTIVE BIRD COMMUNITY, SAMIA ESCHEWS ANY MORALIZING IN FAVOR OF AN UNDERSTATED BUT DEFIANT REPETITION OF THE SONG’S KEY LYRIC (“I’M NOT ASHAMED OF MY PAST”).

FOR “PARIS,” SAMIA STRIPS BACK TO A STARK ARRANGEMENT OF ACOUSTIC GUITAR AND FRAGILE VOCAL WORK, CENTERING THE SONG ON HER POINT-BLANK STORYTELLING (“I’M SORRY I DRAGGED YOU TO STARBUCKS/I THOUGHT YOU WERE BEING TOO PROUD”), THEN CLOSING OUT WITH A HEARTBREAKER OF A FINAL LINE. LIKE “LASTING FRIEND,” “PARIS” CAME TO LIFE IN COLLABORATION WITH PRODUCER CHRISTOPHER DALY (DIET CIG, PORCHES), WHO HELPED INSTILL THE TRACK WITH THE AUSTERITY SAMIA HAD LONG INTENDED. SAMIA ADDS “I WENT TO PARIS WITH SOMEONE TOWARDS THE END OF A RELATIONSHIP AND SPENT THE WHOLE TIME FAILING TO PROVE THAT I WAS EUROPEAN. I AM NOT. TURNS OUT IT'S OKAY TO BE YOURSELF, PEOPLE WILL LOVE YOU FOR WHO YOU ARE, ETC.”

NOW AT WORK ON HER DEBUT ALBUM, SAMIA IS ALSO SET TO TOUR WITH DONNA MISSAL, WITH A MISSION OF TURNING EACH SET INTO A MOMENT OF PURE CATHARSIS.“WHEN I PLAY LIVE, THE MOST IMPORTANT THING FOR ME IS TO PROVIDE A SPACE FOR PEOPLE TO FEEL THE SAME FREEDOM THAT I DO. IT SHOULD BE JUST AS MUCH ABOUT THEIR EXPERIENCE AS IT IS MINE.”