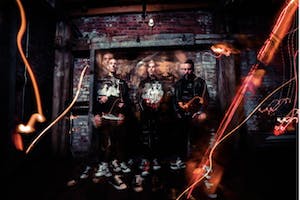 Every time we wake up, we return to life. Shaking off slumber, the world seemingly begins anew in front of our eyes.

Dub Trio underwent such an awakening.

Over nearly two decades together, the Brooklyn triumvirate—Stu Brooks [bass], DP Holmes [guitar], and Joe Tomino [drums]—not only delivered a string of albums that forever redefined the term “dub” under cover of metal, punk, alternative, and shoegaze, but also infused its musical prowess into the studio recordings and the shows of genre-bending icons ranging from Mike Patton to Lady Gaga. The three-piece introduced itself on 2004’s “live-dub experiment” Exploring the Dangers Of followed by successors New Heavy [2006], Another Sound Is Dying [2008], and IV [2011]. Conjuring up instrumental music hummable enough to sing, praise came from the likes of Pitchfork who predicted “Dub Trio are on to something.” Along the way, the guys served as Peeping Tom’s live band and toured alongside everyone from Clutch to Gogol Bordello and Dillinger Escape Plan.

However, the band took a hiatus as a collective in 2015 after touring heavily behind IV. Having an impact on various genres, they served as the backing band on the Lady Gaga demos that famously attracted the attention of Interscope in addition to backing Matisyahu for six years. Brooks received a GRAMMY® Award nomination for his work with Pretty Lights in addition to backing Rock and Roll Hall of Fame® Inductee Dr. John on the road. During 2018, he played bass in the Saturday Night Live Band sharing the stage with the likes of Kanye West and Kid Cudi. Moreover, he is the musical director and bassist for the GRiZ Live Band alongside Tomino. Additionally, Tomino hit the kit for The Fugees as Holmes lent his six-string talents to Mos Def, Common, and more in the studio. Members shuffled around the country with Holmes in North Carolina and Tomino in Cleveland before regrouping for a European tour in 2017.

A two-week 2018 reunion at a tiny Brooklyn rehearsal spot set the stage for their fifth full-length and first release for New Damage Records, The Shape of Dub To Come as an homage to titles such as The Refused’s The Shape of Punk to Come and Ornette Coleman’s The Shape of Jazz to Come.

“The band has been in hibernation, and now we’ve awakened,” smiles Brooks. “It took a while just by virtue of the fact everyone was in a different geographical location. Once we got together, we rehearsed for a few days, hit the studio, tracked, and mixed everything within two weeks. It has a different energy. It’s more fresh. The first time playing these songs was three days before we hit ‘record.’ That’s a big part of the record’s identity. We needed a little bit of a break, because we’d gone so hard for fifteen years. Joe had a baby. Dave had a baby. In the rehearsal room, it was like no time had passed though. There was a little bit of nostalgia and sentimentality. We fell into our usual patterns and continued.”

“It felt like going back to the beginning,” adds Tomino. “Back in the day, we used to play in really close quarters: Dave’s basement. That’s where it started. Here we are in this little Brooklyn rehearsal room, and it brought me back to the roots of Dub Trio. It started this recalibration as we went home to the genesis of Dub Trio and evolved from there.”

This time around, the groove hinged on slower stoner-inspired sludge riffing—another first. The space allowed the dub to flourish. “We got comfortable with the space,” adds Tomino. “We could let it breathe and let it go, one step at a time. Even though we hadn’t necessarily been that sludgy in the past, it made room for the dub.”

Album opener “World of Inconvenience” [feat. King Buzzo] illuminates this progression. Guttural guitar buttresses up King Buzzo’s cacophonous bellow as feedback curls around a thick beat. Meanwhile, the single “Fought The Line” [feat. Troy Sanders] pairs a near-whisper with a delicate clean guitar as the Mastodon vocalist and bassist carries a sweeping crescendo. Pinch harmonics squeal amidst a simmering backbeat as the track culminates on a haunting and hypnotic chant.

“I’m always very humbled when someone wants me to be a part of their art,” says Sanders. “‘Fought The Line’ references struggle. It comes from a poem that I wrote inspired by a conversation I had with cancer itself. I stared at a face of beautiful soft skin and assured this face, ‘I will take care of you.’ We’re fighting one battle together. I’m right there, if things fall into my hands. The verses were therapy venting my anger. When people are fighting for their lives, it’s very easy to go off the line. If death is reeling you in, then you have to fight and do anything in your power to overcome it. I just wanted to be there to support.”

Elsewhere, “Life Signs” borders on dark industrial with its glitchy electronic swells, and “Spider” crawls with a menacing intensity. At the center, “Forget My Name Dub” [feat. Meshell Ndegeocello] emanates soothing transmissions from the vocal phenomenon upheld by forward-facing reggae rhythms and sparse production. It personifies the title, The Shape of Dub To Come.

“We were a dub/reggae band, and we started implementing what we thought was cool from The Refused and bands like that,” explains Brooks. “The Shape of Dub To Come describes our whole method; applying dub as a process to virtually any style of music. The future of dub doesn’t have to be just reggae. It’s a process rather than a genre.”

In the end, Dub Trio are awake and staring into a bright future.

“These songs come together like chapters of a book,” Tomino leaves off. “It’s an auditory snapshot of the individuals and the collective—where we were and where we are. It’s a big arc that spans everything from our roots to metal and ambient electronic music. It’s a big picture of little snapshots.”

“We hope you listen to the whole thing from start to finish,” concludes Brooks. “It takes you on a journey and tells a story. Hopefully, you end up in a different place at the end. We certainly did.”