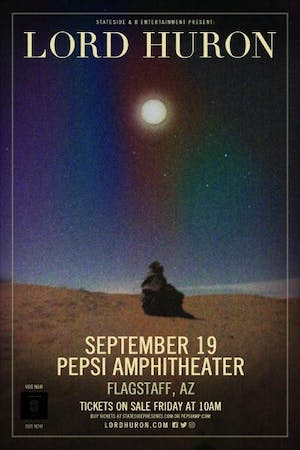 Ben Schneider conjured Lord Huron from the depths of Lake Huron during a trip to his family home in northern Michigan in 2010. Ancient memories, smoke over the moon and nights full of perilous laughter all bolstered the brew from which Lord Huron emerged. Ben brought Lord Huron back with him to Los Angeles, where strange young things are known to flourish, unhindered.

As the songs grew, so did the need for a band to play them. Answering the call ringing out from California, grand brethren from years past, friends and fellow Michiganders, Mark Barry, Miguel Briseno and Tom Renaud, left their respective paths, or bent each road to their own will, to reconvene out west. An old crew reformed in a new harbor.

After a pair of EPs, a debut album, Lonesome Dreams saw release in 2012. Tours followed that found the boys in blistering deserts, reveling in sinister paradises, wandering frozen coasts and lost among the hanging fog of bygone forests. Who can say but the soles of their shoes how far they travelled and how wide?

In 2014, trail-weary but intrepid, Lord Huron set up camp deep in Los Angeles at Whispering Pines Studios to notch their latest songs and abet the journeys of others. Lord Huron will release the next chapter of their adventures, Strange Trails, in April 2015.