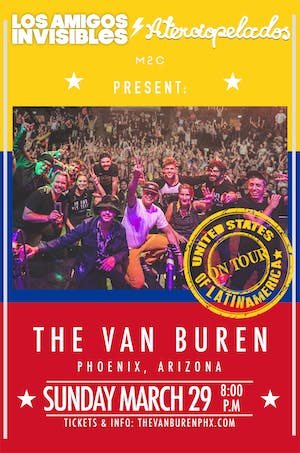 Aterciopelados, the pioneer Latin-American folk-rock group, returns after 8 years with their first long and live project entitled “Reluciente, Rechinante y Aterciopelado.” This CD+DVD is a compilation of the most representative songs of their repertoire that celebrates over two decades of their existence as a band. It features the participation of big names, such as Macaco, León Larregui (vocals for the Mexican group Zoé), Goyo (Chocquibtown) and Catalina García (Monsieur Periné).

The group’s members, Andrea Echeverri and Héctor Buitrago, founded Aterciopelados in 1992 and achieved great success, both locally and internationally, thanks to a sound that was absolutely unique and innovative, free of prejudices, mixing rock with the roots of Colombian folklore and even with salsa and bossa nova.

Aterciopelados have grown and evolved with each production, making history in Latin America and the rest of the world. They have released seven studio and one compilation album, selling over ten million copies of their records. Their album Río has been mentioned by Rolling Stone magazine as one of the 10 best Latin rock albums of all times.

They have earned two Latin Grammy awards and been nominated on multiple occasions for the Grammy. Aterciopelados are also Amnesty International ambassadors focusing on the fight against abuse of women and have been strong activists since the beginning of their journey as a group, as well as individually, with Andrea releasing three studio recordings (“Andrea Echeverri”, “Dos” & “Ruiseñora”) that reveal a very clear position regarding gender issues and the rights of women. The first one of said albums carries her name.

Furthermore, Hector, who is composer and producer for many up and coming artists, has always been interested in the environment and the legacy from ancestral indigenous people, and has actively participated in organizing “Canto al Agua,” an intercultural network focusing on healing and caring for the water. His soloist discography consists of his albums “Conector”, “Conector II” and “Niños Cristal”.

Hector and Andrea are currently presenting “Reluciente, Rechinante y Aterciopelado”, homage to all the songs that turned them into one of the greatest and most renowned rock bands in Colombia and worldwide. As a result of their getting together after a three-year recess and with the objective of presenting their greatest hits at the 20 years of Rock al Parque, they have created this CD+DVD. It includes songs that made the “50 most viral songs of Colombia.”

This is an album filled with environmental-friendly elements, and all related videos of the group are already available on the Vevo channel on Youtube and available on all streaming and online purchasing websites. It is a summary of the greatest hits of a legendary band that has left its imprint on more than one generation for over two decades.

In the middle of their world tour “Reluciente, Rechinante 2017”, in which they support the release of the live album that bears this name in different countries in Europe, Aterciopelados’ pays tribute to Juan Gabriel, with its version of “He venido a pedirte Perdón”.

According to Andrea and Héctor, this song is “Sound nu disco and plancha futurista”, referring to the term ‘iron music’ that in Colombia encompasses the great songwriters of Latin music of the 70’s and 80’s.

The band´s name comes from the television show “Human Values” by Venezuelan historian Arturo Uslar Pietri, which remained in the air for two decades, where he always dedicated the show to his “Invisible Friends” refering to the audience.

His record debut came in 1995 with the release of “A Typical and Autoctonal Venezuelan Dance Band”. Little by little, the band consolidated its local fame by staying on tour until 1996.

Two years later the band moves to the city of San Francisco for 2 months to record their next album and it is at this time that the band is considering the possibility of moving permanently to the United States to continue their career.

At the end of 2000 they put on sale their third album “Arepa 3000: A Venezuelan Journey Into Space” produced by Phillip Steir which is nominated for a Grammy Award and a Latin Grammy. Of this disc they leave subjects like “Cuchi Cuchi” and “The Neighbor”.

After almost a year of planning, the band decided to move to New York City on January 23, 2001. During their first year in the city, Los Amigos began a friendly and working relationship with the legends of the dance world “Masters At Work” which leads them to enter the studio in early 2002 to record what would be their fourth album.

“The Venezuelan Zinga Son, Vol. 1” produced by Masters At Work, is published in Venezuela in 2003 and in the United States in 2004 and that same year they are nominated for a Latin Grammy in the category of Best Alternative Latin Album. Being their most mature album according to the criterion of many fans, Los Amigos achieve an impeccable and unique sound and include songs of more than 8 minutes with long instrumental sections, remembering the great recordings that were made in the 70s and 80s.

In 2006, Los Amigos Invisibles ended their contract with the Luaka Bop label and independently edited their album “Superpop Venezuela”. This album is a collection of Venezuelan songs from the 60s, 70s and 80s. This album is nominated for a Grammy in the category “Best Latin Rock, Alternative or Urban Album”. This would be their 2nd nomination to the American Grammys.

“Repeat After Me”, their 7th studio album, released in 2013. It earned the band the Latin Grammy nominations for Best Latin / Alternative Rock Album and for Best Packaging Design.

On October 14, 2016 Los Amigos Invisibles published on all the platforms “Dame El Mambo”, the first single from their most recent album “El Paradise”, which came to light at the beginning of 2017. A cocktail of great international producers with surprising collaborations. Currently Los Amigos Invisibles continue their international tour while promoting “Espérame” feat. Elastic Bond, the third single from “The Paradise”. Earlier in 2018 “El Paradise” was nominated for the Best Latin Rock, Urbano r Alternative Album Grammy.