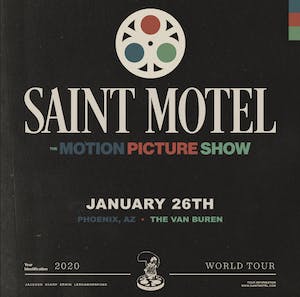 -PHOTO OPPORTUNITY WITH THE BAND

THIS EVENT IS 13+ (12 & UNDER ADMITTED WITH PARENT/LEGAL GUARDIAN) 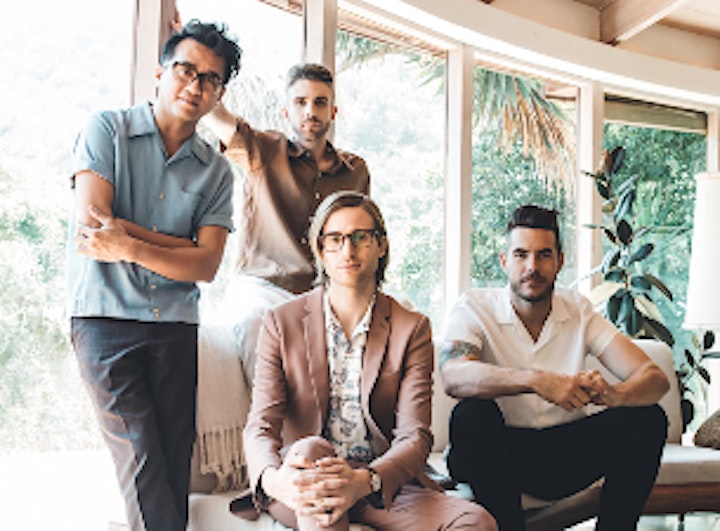 The year before making their breakthrough with a mainstage performance at Coachella and the chart topping single “My Type,” Saint Motel had planned to host an event of their own called “saintmotelevision”—a multimedia spectacular of music, dance, comedy, art, and more that was shut down by authorities before it even took place. “That crazy mixture of worlds and ideas is something we’ve always gravitated toward,” says front man A/J Jackson in reflecting on the original saintmotelevision. “We’ve always been fans of strange combinations, and that glorious yet doomed event became a symbol of all that.” So when it came time to create their forthcoming full-length debut for Elektra, the band reclaimed the name saintmotelevision and, in the end, dreamed up an album as magnificently kaleidoscopic as that mythic party itself.

Featuring production from the likes of Lars Stalfors (Cold War Kids) and Tim Pagnotta (Walk The Moon)—as well as from Jackson, in and around the band’s own studio in downtown L.A.—saintmotelevision builds off 2014’s My Type EP with a sound even more expansive and artfully genre-blurring. And with its effervescent melodies and shapeshifting grooves, the album emerges as a beautifully alchemized piece of alt-pop, every bit the “channel-surfing odyssey” its namesake was meant to be.

Lead single “Move” serves as saintmotelevision’s opening track, a psych-rock-tinged dancefloor anthem with a chorus so catchy that—during Saint Motel’s raucous sets at summer festivals like Lollapalooza and Bonnaroo—audience members instantly shouted along despite never having heard the song before. In the lyric video for “Move,” Saint Motel have also unveiled their latest undertaking as a decidedly visually-oriented group: the so-called “virtualizer,” which combines 360° animation and virtual reality technology that allows each viewer a chance to experience the music in a fully immersive manner.

Throughout saintmotelevision, the band transforms their infinite inspirations into songs that radiate an electric, unabashed joy. On “Getaway,” for instance, Saint Motel shape their fascination with Donna Summers’ “I Feel Love” into a shimmering, intensely charged pop number powered by massive piano riffs. With “Destroyer” (as in “I don’t break hearts, I destroy them”), the band echoes the seductive danger in the song’s lyrics by bringing in some fantastically trashed-up horns a la Exile on Main St.–era Rolling Stones. Meanwhile, on “Sweet Talk,” Saint Motel channel Iggy Pop-inspired swagger into a stomp-and-clap-driven heavy-hitter destined for sing-along status.

Just as inventive in its lyrical element, saintmotelevision brilliantly twists together melancholy and levity in songs like “Local Long Distance Relationship (LA2NY)” (a brightly wistful meditation on love in a social-media-crazed era and on being with “someone who’s physically there with you but mentally far away,” according to Jackson). One of saintmotelevision’s starkest moments, “Born Again” calls on an L.A.-based gospel choir to help convey the track’s enigmatic message. ‘Born Again’ rides the line between two worlds, so you can’t really tell which way to take it.” And on “For Elise,” Saint Motel play on the mystery of Beethoven’s immortal beloved by paying rhapsodic tribute to the legendary muses behind songs like the Kinks’ “Lola” and Lou Reed’s “Walk on the Wild Side.”

Passion for eclecticism has always been at the heart of Saint Motel, a band founded by Jackson and guitarist Aaron Sharp: film-school classmates whose longtime friendship had its roots in a shared appreciation of obscurist cinema and mutually adventurous musical tastes that include everything from Imperial Teen to Beethoven’s 7th Symphony, 2nd Movement. After bringing bass player Dak Lerdamornpong and drummer Greg Erwin into the fold, the band released their debut EP ForPlay in 2009 and began hosting a series of “experiential concerts” with such themes as Zombie Prom and Judgment Day. “We played in half-pipes, semi-trucks, circuses—pretty much anywhere we could,” says Jackson. “We just wanted to do what we could to push ourselves beyond our comfort zone, and give people some kind of big, crazy experience whenever they came to see us.”

Thanks in part to those one-of-a-kind live shows—and to their critically acclaimed, independently released 2012 full-length debut Voyeur—Saint Motel steadily built up a devoted underground following throughout their early years. Releasing the My Type EP in summer 2014, the band saw their fan base grow exponentially as the title track became a top 10 alternative radio smash, with both the song and its companion video (directed by Jackson himself) each collecting streaming figures in the tens of millions, and counting.

Now set for a fall headlining tour—with their past tours including support slots for Arctic Monkeys, Imagine Dragons, Band of Skulls, and Weezer —Saint Motel have discovered a new outlet for their boundary-breaking brand of artistry. With plans of creating virtual-reality-enhanced videos for more tracks from saintmotelevision, the band hopes to offer an even more immersive way to experience what Nylon recently referred to as “a bright, dreamy sound that transports listeners to another time and place.” “There’s essentially a new art form there,” says Jackson of the virtualizer. “But it’s also like when you were younger and bought a new record and went home and put it on, and you’d sit back and close your eyes and kind of enter the album. This is a whole new way to do that, where we’re letting people walk into the album and then just live inside it for a while.”

KOLARS is a Los Angeles duo that blends rockabilly, disco, glam, and mod sounds with modern rock through minimal instrumentation: guitar and a tap-dancing drummer. As Rob Kolar sings and strums his rollicking guitar, Lauren Brown uses her whole body as a percussive instrument, tapping out the hi-hat rhythm with her feet atop a bass drum while simultaneously playing a stand-up kit, using dance to transform rhythms into natural extensions of her movement. It’s quite the workout and undeniably mesmerizing to watch.

“We wanted to create dance music that combines all the genres of music we love, but with our own original twist,” says Kolar. “It's that idea of taking a pop song and getting people to move to it. To listen but also feel it in their bones.” The result is a kinetic, pulsing sound anchored in vintage style with a modern sensibility towards production.

As former members of glam-folk band He's My Brother She's My Sister, Rob and Lauren toured the U.S. and Europe extensively, playing some of the best stages and festivals, including Bonnaroo, Summerfest, Firefly, Secret Garden Party, and Austin City Limits, and performed on late night television (Craig Ferguson). As that band veered towards indefinite hiatus, Rob and Lauren decided to strip things down and explore what they could do as a twosome. A match musically and romantically sublime, there's no denying the electricity this husband and wife duo have on stage.

“HMBSMS really showed us how much people want to dance to live music,” he continues. “And it doesn't need to be electronic. That band started out as a folk band and evolved much in part because of the audience’s desire to hear us play hip-shaking tunes. That's what got people excited. KOLARS is taking that seed into a more modern world of production and experimentation. As I do all the recording, producing, and mixing, and as Lauren has a very unique way of drumming, it inevitably makes us sound a little ‘handmade.’” And that’s the sweet spot. Their performance is magnetic, sexy, and inviting.

Through playing live, Brown found her groove. Kolar explains, “There is something simple and driving about the disco beat that we really enjoy and feels primal and minimal. Basically 4 on the floor. Tap works nicely clacking on that simple rhythm. It gives the tap freedom to roam a bit. The band Hot Chocolate really inspired me to take a crack at some disco production as I fell in love with their somewhat zany delivery and incredible fuzz guitar tone.”

As for lyrical content, Kolar weaves emotions and personal experience with social commentary. “I try to write every song with two meanings. There is almost always some kind of commentary or social observation pertaining to our society, politics and relations as human beings. I tend to use language that is interpretable and not too overt, to allow the listener to make it their own.”