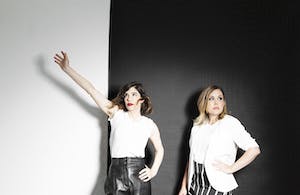 **EVERY PAIR OF ONLINE TICKETS PURCHASED COMES WITH ONE (1) CD COPY OR ONE (1) DIGITAL DOWNLOAD OF SLEATER-KINNEY’S FORTHCOMING ALBUM. YOU WILL RECEIVE AN ADDITIONAL EMAIL WITH INSTRUCTIONS ON HOW TO REDEEM YOUR ALBUM AFTER YOUR PURCHASE. U.S. / CANADIAN RESIDENTS ONLY. OFFER NOT VALID ON ANY RESALE TICKETS.**

Sleater-Kinney's The Center Won’t Hold is the first new album from the celebrated band since their 2015 album, No Cities To Love, available August 16 on Mom + Pop. After years of legendary collaboration, rock’n’roll giants Carrie Brownstein (guitar/vocals) and Corin Tucker (guitar/vocals) sound bigger and bolder than ever. The new album was produced by Annie Clark (St. Vincent), and hailed by The FADER as “one of the most furious, dynamic records of their career.” The New York Times called them “one of rock’s most enduring and respected acts” and Rolling Stone gave the record 4 stars and raved, “one of America’s greatest bands does battle with modern apathy on thrilling LP.”

Sleater-Kinney set a new bar for punk’s political insight and emotional impact. Now, at the height of their formidable powers, the feminist icons continue to challenge themselves, break all the rules and push boundaries. This new creative chapter in the acclaimed band’s musical journey is poised to win over both longtime admirers and new fans alike.

KAINA is a first-generation Latina, born and raised in Chicago. The sweet-hearted optimism in her writing aims to connect to and lift the spirit of the listener. Through the mentorship of Chicago natives like The O’My’s, her multidisciplinary work around the city with various organizations, and collaboration with her peers, she found a sound for herself that is gentle yet full of soul and intent.

In 2018 she premiered her single “f*cked up” on Clash Magazine and a 3-track EP entitled 4u that follows up her last EP release, sweet asl. Her work joins company with her features on Saba’s “CARE FOR ME” and subsequent Tiny Desk appearance as well as Sen Morimoto’s “Cannonball!” and The O’My’s “Tomorrow”.

She continues to write songs while playing shows around the country, most recently as a main act at Red Bull Music Festival Presents: XICAGO, as well as a direct opener for Kali Uchis at Concord Music Hall and Jamila Woods at House of Vans. KAINA embodies a soft, savory voice that’s sharp enough to remind you of what happens when you get too close to the sun.