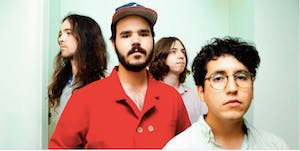 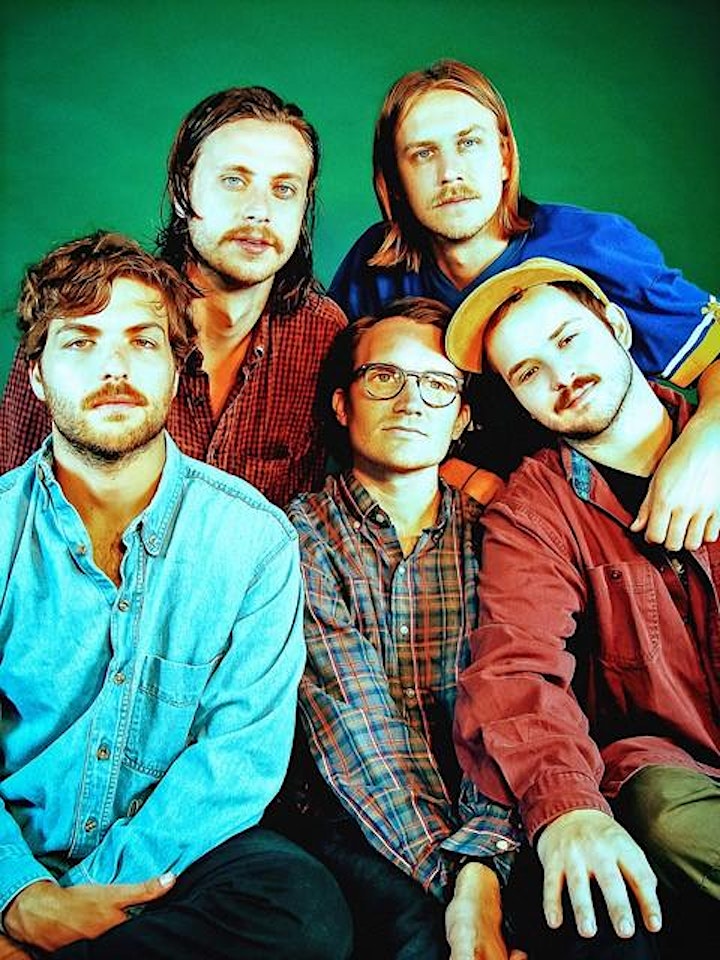 The music of Duncan Fellows explores multiple vibes, feelings, tempos, and perspectives—and often in the same song. With the new EP ​Eyelids Shut​, the five-piece from Austin explores that dynamic balance while concurrently toeing a similar line in their own lives.

Named for the address of a ramshackle house inhabited by several of the bandmates in their formative years, they’ve now—with everyone firmly in their mid-20’s—traded a life of piling into various bedrooms for piling into a tour van, creating a mobile Duncan Lane of sorts by staying true to that era’s sensibilities of shared adventure. Fronted by Colin Harman (vocals/guitar) and Cullen Trevino (guitar/vocals), the lineup is rounded out by Jack Malonis (keyboards/backup vocals/guitar), Tim Hagen (drums), and David Stimson (bass), with musical input coming from all corners.

Typically, Harman and Trevino do most of the songwriting—alone or together—and once a song’s bones are in place they bring it to the larger group to develop the arrangements and individual parts as a band. The live-in-a-room collaborating is an integral part of the process, and oftentimes tidbits from other music the band members are listening to will find their way into the works. But the sonic details are decided first and foremost by the emotions that push each song along. As Malonis says, “We believe heavily in trying to serve the spirit of a song, so when we’re arranging as a band we really want to bring that out as best we can.”

Following the release of two EPs—2013’s ​Twelve Months Older​ and 2015’s Marrow—w​ hile the band members were in college, the Duncan Fellows debut full-length ​Both Sides of the Ceiling​ dropped in 2017 and put the band firmly on the map. Featuring the good-time earworm of a single “Fresh Squeezed” and an entire album’s worth of upbeat rhythms, head-nodding riffs, and playful, pleasant harmonies, the record was championed by local radio, leading to a bevy of Spotify spins. Audiences fell in love with the Fellows’ passionate approach and charismatic energy, flocking to see them onstage in action with acts like

Houndmouth, Middle Kids, The Drums, Whitney, and Wilderado, as well as at slots playing festivals like Austin City Limits and SXSW. But while the band embrace their reputation as a fun-loving band of buddies making feel-good indie jams, they also acknowledge that this perception only represents one side of their coin.

“We tend towards the deeper stuff you have to chew on longer,” Harman says. “Our tendency is to sing about the more difficult things we encounter in life, and as we’ve gotten older we’ve experienced heavy things that have added more serious layers to what we do. But at the same time our most popular song is largely about waking up and making breakfast. We definitely talk about straddling that line.”

And with the release of the new ​Eyelids Shut ​EP, the band is establishing that double-edged identity even further. The four songs here are doused in maturity, both thematically and sonically. “Loss” and “reflection” are the words the band points to when discussing what the songs are about, and how aging lends fresh perspective to such topics. “As you get older, your perspective on things like loss changes but you still live with everything that’s happened to you,” Trevino says.

Malonis finishes the thought: “I also resonate with losing a version of yourself, how as you’re experiencing these losses you’re losing the more naive parts of yourself. A lot of it lines up with the theme of our first album: becoming an adult and growing wise to the ills and parts of the world that aren’t so pretty.”

Though the sonic spirit of ​Eyelids Shut​ varies from track-to-track, and even moment-to-moment, the songs’ common bonds propel the band to new heights. The EP begins with “Deathwish Fish,” a somber, steady number that ascends with its heavy thrum of climbing keys and guitar and a constant, powerful thump. The song details the journey of pain from a loss throughout the better part of a decade and the repercussions of that healing process over time. Next is “Cursive Tattoo,” a two-step stomper that plows through its swinging tempo with chiming, dirge-y guitars and twinkling piano rolls as Harman sings, “You swore I was everything you wanted and more/but I’m not quite sure if I’m what you need.” “Aliens” has a surfed-out, sunny vibe replete with high tremolo tone and a stop-start, clip-clop beat with matching fuzzy power chords, as if Parquet Courts traded the weed for a sunrise set of waves. ​Trevino’s soft vocals turn into aggro howls in the same breath, and the effect is mesmerizing.​ The reverb-heavy Vox organ recalls classic heady garage tracks like “96 Tears” and the whole song has a dark, pushy, in-your-face feel. The EP ends with the title track, a heavier head-nodder that calls to mind the tempo and guitar lines of Weezer’s “Undone (The Sweater Song)” meets the moodier work of Local Natives and serves as a bookend to the record. Recognizing that the song’s lyrics and story encapsulated the bigger themes spanning the EP—from the reflection on mundanity it presents to lines like “I woke up my eyelids shut/Forgot my dream and what I want to be”—they gave the record its title as well.

“‘Eyelids Shut’ is us saying, ‘Hey, this is life now, I still have to wake up and go into work on Monday whether I’m changed or not,” Trevino says. “Life goes on regardless of what has happened.”

Harman echoes, “That concept connected all the songs together; they’re about reflecting on loss, coming to terms with it, and changing perspective. When you get older, you realize it’s very chaotic being a human being, so this record is us trying to make sense of that.”

In all they do, Duncan Fellows strive to be honest in their music and as people, leaving positive experiences in their wake while expressing themselves and, yes, having a good time. Driven to evolve and grow as artists while never taking themselves too seriously, their sense of adventure and commitment to their craft is sure to serve their spirit well for the long, long haul. 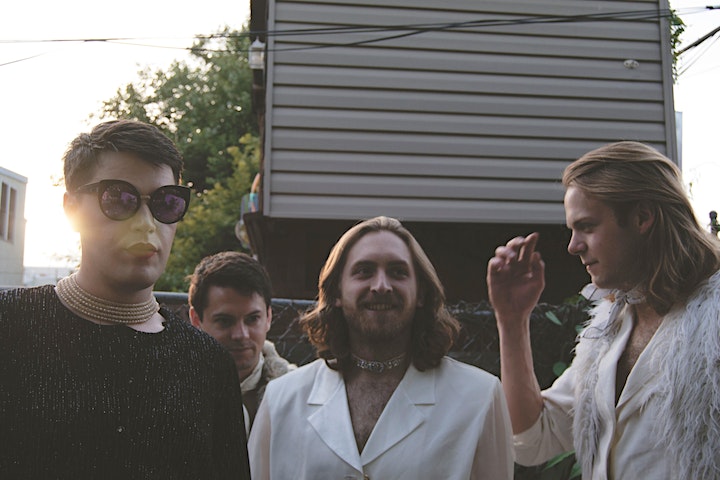 Philadelphia-based rock band Sixteen Jackiesmake music that is often nostalgic, yet defies easy categorization. Pulling influence from glam, new-wave, early alternative (Sonic Youth, Pixies), and horror movies, they've crafted a unique set of torch songs for weirdos and misfits of all kinds that tie together into a tight and theatrical live show.