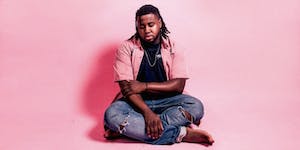 How does Xavier Omär want to be remembered? As a risk taker. A classic voice. An artist who blurs musical lines. A fearless dreamer. And with these big goals, the singer-songwriter isn’t wasting any time. His EP with Sango titled Hours Spent Loving You and The Everlasting Wave are bringing critical acclaim from fans and the industry. In December 2017 Xavier wrapped his first national headline tour, the sold out Pink Lightning Tour.

Xavier takes pride in his songwriting ability and is most excited by the reward of evoking specific feelings in his listeners with his music. He draws inspiration from artists of all genres, including James Blake, Anderson .Paak, Pharrell, and Kanye West.

Xavier Omär grew up moving across the country and as far as Japan, but he claims San Antonio, Texas as home. Music balanced out the highly structured lifestyle of his military family, as his mother and siblings sang and played drums and piano, and his father was a writer, producer and the minister of music at church. He wrote and produced his first song at 12 years old, recording it in his basement on a 4 track tape recorder. In 2012, he hit the ground running with his solo career and hasn’t stopped since.

The history of pop music is one of reinvention, replete with instances of people who, cutoff from resources and representation, have turned inward, mined themselves and remade culture in their own image. And so the story goes with Parisalexa, Seattle’s premiere triple hyphenate—singer-songwriter-producer—who continues to forge her own forward-looking brand of R&B tinged pop with the raw materials of the past.

Last year, Parisalexa emerged fully-formed with her debut EP Bloom, which chronicled the course of a relationship—from its genesis to its greatest heights to its end and the resulting exercise in self-love. Close on Bloom’s heels came FLEXA, a four-track mixtape that representeda departure for Parisalexa in both sound and theme. If Bloom wass about a journey—that offalling in love and discovering oneself—FLEXA was about what happens once you arrive.

Now, with the release of her latest single, “Water Me,” Parisalexa looks towards the future. “Water Me” feels appropriate now, because the relationship I wrote Bloom about is over and it’s a song about reaching out and asking for help,” she says. Now, Parisalexa is shedding the weight of the past and looking towards her future. Things are looking bright.